Power has to be applied strategically

In karate we strive to not fight power against power and speed against speed, therefore control distance and the rhythm of the fight are crucial.

Use footwork to control distance according to your strategy. Use your breath to harmonize with opponent breath and energy, as well as create potential energy in your stance.

Be at the border of opponent’s sphere of energy, where you can easily avoid their power, yet, you can attack in an instant.

Your energy should blend with opponent’s energy, yet take leadership, do not follow.

Be patient, but don’t wait. Be first but do not rush.

You do not have to be physically faster than opponent, but you have to be mentally ahead.

Keep your feet and center active internally, but do not jump around.

When opponent moves you are already in motion.
Read opponent tendency, use footwork to control rhythm, distance, and force opponent to react, hesitate, or commit, make opponent over extend, lose their posture, ability to use floor, and at that instant they cannot use their power, attack.

Use your footwork to avoid opponent’s attack while creating condition for your counter attack.
Catch opponent while moving or in between action without meeting opponent’s power.
Do not use eyes, if you see opponent’s attack it is too late.

Your feet should be able to use floor to initiate technique or shift at any moment.
You should be relax 90% of the time, you only need to use power for short instants, and immediately relax again. Being relax yet strong inside, will help be more perceptive, adaptable, and able to explode in the right instant.
Be like soft clay while moving with opponent, and only at for short instant of hitting opponent be firm.

Estimate, make strategy and once you go, commit and give everything till finish.

We're not around right now. But you can send us an email and we'll get back to you, asap. 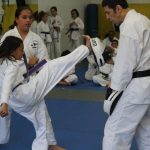